Planting a vision: A farm for the future at Wilyun Pools 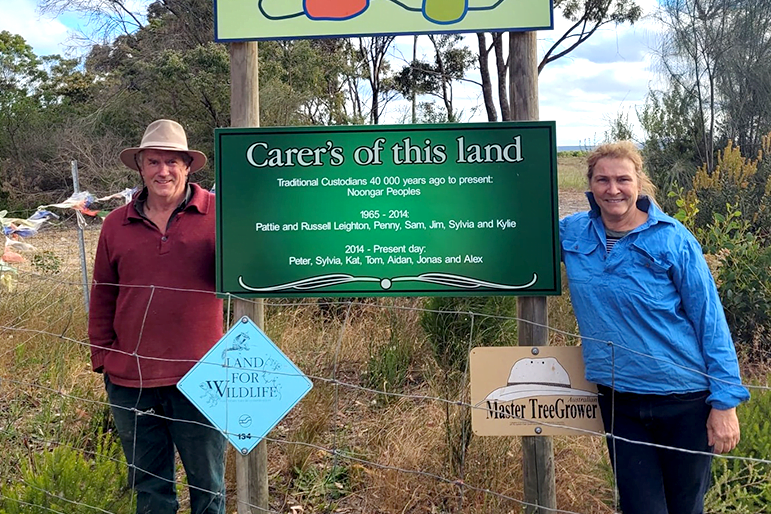 Nestled in Western Australia’s southwest is a pocket of powerful transformation. From dust storms and desertification to thriving bushland, Sylvia Leighton and Peter McKenzie have led an integration of sustainable agriculture with native revegetation for the land, the community, and future generations. On their Wilyun Pools farm, they’ve planted 380,000 trees and shrubs – a reflection of their passion, vision, and commitment to an environment they’re deeply connected to.

Sylvia first arrived at Wilyun Pools, which is around 100km from Albany, in 1965 when she was just six months old. Her parents had travelled from Tasmania, along with many other new neighbours from out of state after large parts of the southwest region of WA were sold under conditional purchase agreements for agricultural development in the post-war years.

“We drove across the Nullarbor in a truck loaded up with a little D4 Dozer. Most people arrived with dogs, kids and all their belongings on the back of trucks. They arrived at their bush blocks and set up camp. Most of us lived in tin sheds for one or two decades.”

Sylvia Leighton, on the early days of Wilyun Pools

The land clearing extent in the 1960s and 70s in the southwest corner of WA was possibly the largest in the southern hemisphere, with an estimated million acres of bushland cleared for agriculture every year (Source). Sylvia thinks this scale of destruction had a big impact on her passion for ecology and the need to protect the land. “All my childhood was just burning and clearing and picking up wood stumps, burning it, and this was all followed by the dust storms. They think this depth of environmental destruction can sit deeply in your psyche,” she says.

Sylvia’s mother was also deeply interested in nature and recognised the area’s diversity and difference to their eastern Australian roots. She wasn’t alone in her intrigue, and in the 1980s a group of women in the district began researching and discovering more about the region’s flora and fauna. Without having any formal education in biology, they wrote books about the district’s birds, eucalypts, mammals, banksias, acacias, and geology. Alongside their work, the growing Landcare movement and partnerships with the WA Museum swelled their passion for the environment and conservation in the local community.

Wilyun Pools was progressively cleared from 1965 predominantly for sheep farming, but as Sylvia’s parents were approaching retirement, they took up the opportunity to lease parts of the farm for blue gum plantations in the mid-1990s. Sylvia’s partner, Peter, also has a deep connection to the land.  He had grown up on a farm in the nearby Porongurup Ranges and forged a career in forestry. Eventually, Sylvia’s family began discussing the future of the farm and the opportunity arose for Sylvia and Peter to take it on. “It was a nice opportunity for Sylvia and myself to implement some of the long-term views we’ve had on agriculture and the environment and put them together,” says Peter.

As the time approached for the blue gums to be harvested, Sylvia and Peter had some big choices to make about the farm’s next phase. “Neither of us wanted to return to open bare landscapes. That was an ethos both of us felt very strongly about. There was this opportunity to redesign, and that was exciting,” says Sylvia. When it came to taking steps to start revegetating parts of the farm, the remaining remnant bush was a key starting point. “The most valuable biodiverse parts of the farm are those remnants. They are the jewels,” she says. “We want to protect those and reconnect them.”

The development of direct seeding technology was also a big factor in the scale of restoration they could undertake. “Suddenly you could just collect provenance seed, lots of it, from a diverse range of native species to your area, and you could sow it in the ground and suddenly have a germination of 35,000 stems per hectare,” she says. “We just had this wonderful leap in our ability to revegetate landscapes. It was really, really helpful in being able to implement our vision.”

“I think there’s still great value in growing seedlings and having people connect to baby native plants. They gain a sense of ‘ownership’ going through the process of putting the seedlings into the ground and watching them grow and be part of creating a healthier landscape,” says Sylvia, who grows around 6,000 banksias and hakeas in the on-farm nursery. The human connection to the plantings has extended to many different volunteer groups including school groups, conservation volunteers, and ecological researchers.

Five years on from the first plantings, Sylvia and Peter’s restoration work at Wilyun Pools has been hugely successful. The revegetated areas on the farm have now grown into thriving wildlife corridors that connect to the remnant bush, which comprise Kwongan shrubland, Swamp banksia, and Yate woodland communities.

“Even when we’re only about eight months down from sowing, you can already have birds in those corridors, and you can see them flying out of your reveg corridor into the paddock, snapping up an insect, and going back into your reveg,” she says. “That’s always given us great pleasure too – just watching wildlife once again getting across the landscape.”

“I think what’s really surprised us – you only just have to provide the habitat and nature bounces back with such an energy and a resilience. That is one of the most rewarding results,” Sylvia says. “I think we enjoy the whole thing,” says Peter. “We want to take a whole view of farming and the environment.”

“Another aspect of it is that nothing we have done is particularly new. I was establishing shelterbelts and conserving land, particularly in the bush on my own farm in the Porongurups back in the 1980s,” he says. Farmers and Landcare groups in the district have long been strong advocates for conservation after facing the threats of the rising water table and dust storms degrading the landscape. These issues have built momentum toward multiple community and industry partnerships which have been an enormous and essential help to Peter and Sylvia, who’ve worked alongside National Landcare, Landcare WA, Southcoast NRM and Green Skills.

In 2021 Carbon Neutral is proud to have become another member in the Wilyun Pools team through our Plant-a-Tree project. “We’re very excited to be coming through with environmental work at a time when it’s going to be financially sustainable,” says Peter. “Most of our environmental work has been done because that’s what we’re passionate about, and we’ve integrated that within the farm, but to see it in this new chapter for agriculture, where it’s commercially valuable and commercially relevant, it’s just fantastic.”

Sylvia and Peter’s passion and care for the land is infectious and inspiring. “By chance we are the present day stewards of this precious, biodiverse part of the planet and we don’t ever take this for granted. We know we need help. We know we need lots of clever minds to keep on brainstorming and working out how best to go forward into the future to reduce the environmental impact agriculture is having on this planet. We are part of this journey and are just trying to do our bit,” says Sylvia.