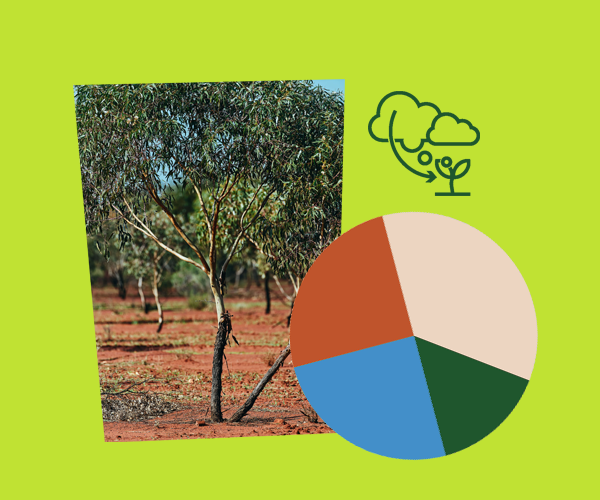 We owe a lot to trees, and in particular, one of their functions that is the basis of almost all life on Earth: photosynthesis. Trees have the remarkable ability to absorb and store carbon from the atmosphere, and whilst doing so, produce oxygen for other organisms to breathe and food to be consumed.

Let’s take a look at this microscopic image of a maize plant.

The red in this image is chlorophyll, found within the maize plant’s chloroplasts.

This special chemical pairs up with the tiny holes on the leaves and stems of trees (and inside some types of microorganisms) to capture light and carbon dioxide from the air. Water, the third crucial ingredient in photosynthesis, is drawn up the plant’s root system.

The light the plant absorbs is used to split water and carbon dioxide molecules and put it back together as a different compound – glucose. Glucose is sugar, and is made up of the same carbon absorbed from the atmosphere. There’s pure glucose in many of the foods we eat, like honey or fruit.

Just like how glucose is food for us, glucose is also food for trees. The glucose that’s produced in photosynthesis is transported all around the plant’s cells to where it’s needed, where it then gets broken down and used as a form of energy.

Sometimes the plant doesn’t need to use all the glucose it makes right at once. This is just like how we store excess food as fats in our bodies. The surplus of unused glucose might be useful later, and so it is stored in the plant’s trunk, branches, roots and leaves.

When the glucose is stored, it is converted into starch. Some starch is stored in the middle layer of the tree called sapwood, or xylem. This sapwood store is transitory, in that the tree can access this stored energy when it needs it or store more excess glucose here.

Over time, some of this starch, (which like glucose, is still made of the carbon absorbed from the atmosphere) in the sapwood moves to being stored in the tree’s heartwood. Once in the heartwood, the carbon is no longer accessed by the tree and is considered to be stored permanently until the tree dies or is cut down.

There are more than 390,000 vascular plant species on Earth, and each species varies slightly in how it stores the carbon it captures in photosynthesis, as well as the ratios of where in the plant it stores this carbon.

In general, about 65% of a tree is dry mass, with the other 35% being water. Carbon usually makes up about half of this dry mass. Species differ in how much of this biomass is aboveground in branches and leaves or below ground in the root system. In most cases, it’s about 80% aboveground and 20% belowground.

Age is also an important factor in the rate of carbon storage – also known as sequestration – by trees. An individual tree’s carbon sequestration rate increases as it ages, before levelling off when it’s fully grown.

This graph helps visualise the generic carbon sequestration rate of trees as they age.

A 2014 paper in the journal Nature analysed the carbon sequestration rate of 403 different tree species from 6 continents. The vast majority of species displayed sequestration rates that increased continuously as they aged.

The rate of carbon sequestration by trees also varies depending upon the growth conditions of where it was planted like availability of nutrients, climate factors like rainfall, and the density of the tree’s wood. This is an ever-expanding area of global research, especially in the context of the climate crisis.

Trees in natural landscapes aren’t usually completely alone and islanded; rather they form forests or exist as ‘stands’ of trees. Trees are better carbon capturers when they’re team players – a healthy forest stores much more carbon than trees individually. This is because carbon isn’t just stored in trees in a forest setting, it is also stored in leaf litter and soils.

Age also has an influence when thinking about collective communities of trees rather than individuals. Younger forests typically grow faster and absorb more carbon overall because trees can be crowded together when they’re small.

Old-growth forests have a less fluctuating carbon cycle. There are usually fewer trees in an old-growth forest, and the large old trees dominate by blocking out light for younger trees.

Forests that contain a mix of age ranges are often considered to be the healthiest. When ages are uneven, there is continuous recruitment of younger trees and older trees hold carbon for long periods. In a forestry context, unevenly aged stands also reduce the amount of damage caused by thinning the stand. Mixed ages of trees in forests also builds ecosystem resilience to climate factors like fire.

The carbon capacity of soils in forests is a topic that warrants another article (or many articles!) and is dependent upon local geology, soil types, and the vegetation community aboveground. For example, clay soils can bind up a lot of carbon, whereas sandy soils less so.

There are many methods of measuring carbon storage in trees and forests, and technologies are continually evolving and are differently suited to different species and applications.

In general, the tree’s volume is estimated, and then the biomass or amount of carbon of that volume figured out. These estimates of volume are made using a special type of equation, known as allometric equations, which are based on the tree’s height or diameter at breast height. These equations have come about using measured values of the weight of trees relative to their height from a suite of sample trees, and there are specific equations that have been developed for certain species. Using these equations is a common and cost-effective method of estimating carbon storage in many settings.

At Carbon Neutral, we have developed innovative and rigorous methods of measuring carbon storage for our biodiverse reforestation and carbon development projects that are of the highest integrity. These methodologies are also in accordance with the standards of certification bodies like the Gold Standard and the Australian Government Clean Energy Regulator’s Emission Reduction Fund. We undertake regular audits of our plantings and ongoing monitoring of carbon stocks.

Why Plant-a-Tree is not a carbon offset

We discussed above how the carbon sequestration capacity of trees increases with age. Trees that are planted through our Plant-a-Tree program are planted as young seedlings or are direct seeded. This means that in their early years of life, they aren’t capturing much carbon compared to their more senior neighbours.

Carbon Neutral does not assign the required measurement methodologies to its Plant-a-Tree trees, and therefore we don’t have the comprehensive data to back up claims of how much carbon they are sequestering from the atmosphere. We do however apply these methodologies to our older growth forests that were planted between 8 and 15 years ago, which verifies them to be used as carbon offsets because we have accurately quantified the carbon they’ve removed from the atmosphere.

If the planet is to reach net zero emissions to reduce global warming, we need to be capturing greenhouse gas emissions right now using offsets that are active right now.

Because trees planted through our Plant-a-Tree program are young and newly planted, they can’t be counted as carbon offsets because their sequestration rate is small and not properly measured. However, these trees are still building habitat for endangered species, restoring biodiversity, and boosting soil and water quality. Eventually, they will grow to be the carbon capture champions their older neighbours are.

It’s important to remember that although carbon is what makes the headlines, it is not the only ecosystem service that trees and forests provide to all organisms. These ecosystems also regulate and provide so much more to us and other species that we rely upon for our livelihood and survival.