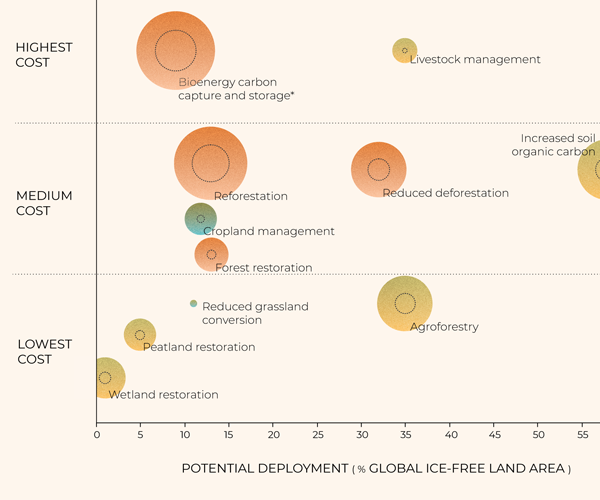 What are nature-based solutions?

What if we could use the power of nature to underpin our efforts to counter the joint climate and biodiversity crises? That’s the idea behind ‘nature-based solutions’.

The term ‘nature-based solutions’ originated in 2008 and was coined by the World Bank and widely adopted by other bodies like the International Union for the Conservation of Nature (IUCN).

The IUCN defines nature-based solutions as: “Actions to protect, sustainably manage and restore natural and modified ecosystems in ways that address societal challenges effectively and adaptively, to provide both human well-being and biodiversity benefits. They are underpinned by benefits that flow from healthy ecosystems and target major challenges like climate change, disaster risk reduction, food and water security, health and are critical to economic development.”

What are the different types of nature-based solutions?

Halting deforestation and creating protected areas can prevent the loss of carbon and other ecosystem services in both land and marine environments.

More than 75% of Earth’s surfaces are currently classified as degraded, and ocean and wetland areas are also increasingly in trouble. Ecosystem restoration aims to rehabilitate degraded environments by activities such as tree-planting, growing seagrass meadows, and rewetting peatlands.

This category of nature-based solution encompasses shifts in practice to more sustainable methods of land use, such as agroforestry, increasing soil carbon levels, and reducing fertiliser use.

How much carbon could nature-based solutions capture and prevent from being released?

This data visualisation shows the mitigation potential of different types of nature-based solutions.

The data was sourced from the Intergovernmental Panel on Climate Change (IPCC) special report on climate change and land as part of its sixth assessment cycle.

A 2019 National Academies of Sciences, Engineering, and Medicine report found that to meet climate goals, CO2 removal technologies and strategies will need to remove approximately 10 gigatonnes of CO2 from the atmosphere every year until 2050.

What’s going on with Bioenergy Carbon Capture and Storage (BECCS)?

The IPCC report says that BECCS has the highest upper estimate of mitigation potential (0.4 – 11.3GtCO2-e per year).

In some circles, BECCS emerged as a climate saviour technology. BECCS produces electricity by burning ‘replaceable’ biomass such as wood, crops, and agricultural waste and capturing and storing the carbon dioxide produced underground.

When the Paris Agreement was signed in 2015, BECCS was central to climate-economic models because it was the only way they could be consistent with limiting temperature rise to 1.5C. In these models, BECCS would need to remove 12 billion tonnes of carbon dioxide each year. At this scale, that would take up 25% to 80% of all land currently under cultivation.

The promise of BECCS has now been sunk by many climate and social development experts, claiming that its not feasible without harming biodiversity, consuming too much water, driving people off their lands and affecting livelihoods.

How do nature-based solutions relate to adapting to climate change?

The climate crisis is being felt globally, with increases in the severity and frequency of natural disasters, changes in agricultural yields, and species extinction happening right now.

Resilience to these impacts relies upon healthy and thriving ecosystems and the services they provide. The degradation of natural ecosystems, aided by climate change, creates a vicious cycle that leave people and nature vulnerable.

Nature-based solutions should take adaptation into account as well as mitigation. For example, mangrove restoration does this well by storing massive amounts of carbon, whilst also preventing coastal erosion and protection from storm surges. Aiming for climate adaptation and mitigation at the same time can also lead to other co-benefits like providing habitat for wildlife, or aiding water quality.

Why have nature-based solutions attracted some criticism?

Others argue that the idea of using nature as a ‘tool’ can take away or distort its original value. Using “solutions” could imply that nature only benefits humans, and could reduce its intrinsic or as claimed by Bolivia at COP26, “sacred”, value.

The IUCN has published guidelines outlining how successful nature-based solutions should be “based on mutual respect and equality, regardless of gender, age or social status, and uphold the right of Indigenous peoples to free prior and informed consent”.

So are nature-based solutions part of the answer to the climate crisis?

In short, yes. But its also important to recognise that they’re not the entire solution and they need to be integrated with real structural change.

The aim must be to keep fossil fuels in the ground and pursuing drastic emission reductions wherever possible alongside nature-based solutions.

“By restoring degraded ecosystems and effectively and equitably conserving 30 to 50 per cent of Earth’s land, freshwater and ocean habitats, society can benefit from nature’s capacity to absorb and store carbon, and we can accelerate progress towards sustainable development, but adequate finance and political support are essential.”

For more research and insights on nature-based solutions, this Mongabay Newscast podcast is a great resource with discussion from Alfredo Quarto from the Mangrove Action Project and Noah Berk from Rainforest Foundation UK.

A recent paper in the journal Nature has also quantified the climate effect of nature-based climate solutions in a scenario where land-based carbon storage is enhanced over the next several decades, and then returned to the atmosphere during the second half of this century.