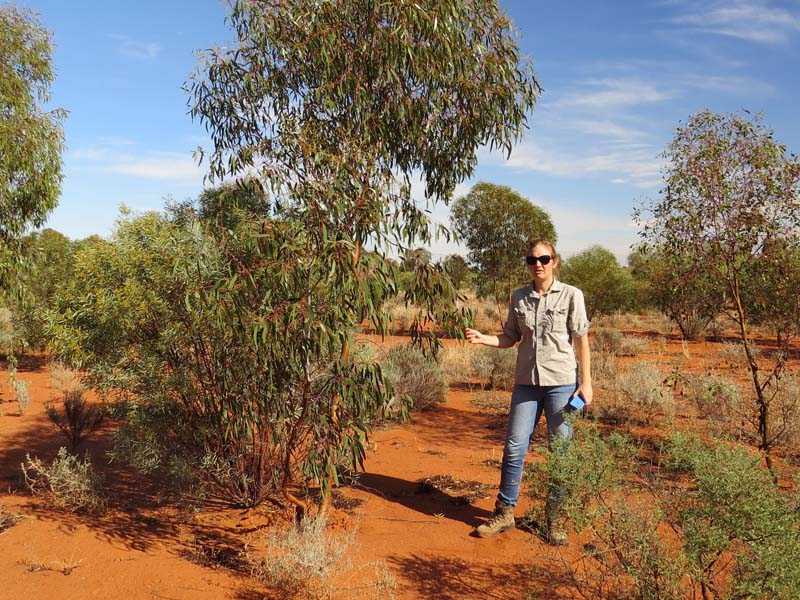 Restore. Verb. Bring back or re-establish.

How can you repair ecosystems that are damaged? This big question is one that’s always bugged Dr Tina Parkhurst.

19 years ago when Tina arrived in Australia she became fascinated with the landscape and ecology of the Australian wilderness, and enthralled in its difference to the European environment she was more familiar with.

In 2009, whilst working in finance, she decided to turn this passion into a career. Tina began studying environmental science in Darwin, and since then she’s been hooked.

“I was interested in restoration I think from day one. I think in my first year of uni I did a restoration unit…it was something that always fascinated me,” says Tina.

Her curiosity continued to grow as she completed her honours research project in the final year of her undergraduate studies, and became even greater after moving to Eurardy Station at the northern tip of WA’s wheatbelt in 2016.

“Eurardy had 3,000 hectares of cleared land that was still being cropped alongside 30,000 [hectares of] in-tact vegetation. And it sort of entirely bugged me that we were living on the Conservation Reserve that had 10% still in a production sort of capacity. The land wasn’t suitable for production. Eurardy was actually the most northern cropped station in the state, like literally the tip of the wheatbelt. It wasn’t suitable and should have never been cleared, it should have been restored. And that’s sort of what led to the PhD,” says Tina.

Eurardy is managed by Bush Heritage, who funded her PhD project along with Carbon Neutral, Gunduwa Association, and the Holsworth Wildlife Research Endowment. After Tina met and planned with her PhD supervisors (Dr Rachel Standish at Murdoch University, Dr Suzanne Prober at CSIRO, and Dr Richard Hobbs at University of Western Australia), the scope and goals of the research project came into focus.

Tina wanted to compare how ecosystems varied between three different states: 1. Bare, previously cropped land (the restoration starting point) 2. Restoration planting sites on these fields (restoration in progress) and 3. In-tact vegetation (the undisturbed reference state). Comparing these three different states hopefully gives the opportunity to assess how the progress of restoration is tracking, and then apply these observations to make improvements to future practice. Tina and her supervisors chose ten different sites in the northern wheatbelt that represented each of these conditions, including one planting site in Carbon Neutral’s Yarra Yarra Biodiversity Corridor.

The variation of ecosystems in semi-arid areas like where Tina studied can be deceptively complex. To get the best picture of this complexity Tina wanted to measure multiple facets of these ecosystems to really understand what was going on. To do this, she and her team measured three features in each of the three ecosystem states:

In the world of ecological restoration, trying to return agricultural landscapes to the ecosystems that once thrived there before they were cleared and cropped can seem at times like dabbling in the dark arts. The convoluted legacies brought by land use often entangle with each other and create environmental barriers that can be tricky to break through.

Tina found that some of the biggest of these thresholds were in the soil, especially in areas that once were cropped and had fertiliser applied. “The increased soil nutrients that remain, in particular the phosphorus, is an issue. Because we don’t know how to reduce that. Some of the other nutrients break down, but phosphorus hangs around. And I guess it’s specifically an issue in areas like Australia, where you have low natural phosphorus soils. So then how can you reduce that or return that back to its natural state and presence? I don’t think we know how to do that,” says Tina.

These kind of conditions below the ground can have big consequences on what grows above it. Tina found that 10 year old restoration plantings had strong recovery of woody species that were comparable in diversity to the remnant vegetation. However, some of the smaller shrub species in the understorey were missing from the planted sites. “There’s some hypotheses as to what we’re thinking as to why [the shrub species] might not come back. Because there’s still high phosphorus in the soil, even though they may be able to grow in that medium, the exotics that still persist on the site out compete them completely. So the exotics just grow much quicker, and so the smaller, less fast growing natives don’t have a chance really,” says Tina.

Investigating these ant communities at the study sites involved quite a steep learning curve and painstaking attention to detail. After the ants are captured in pitfall traps from the restoration sites, what gets collected needs to be sorted. “I was up there [in Darwin with CSIRO Chief Research Scientist Dr Alan Andersen] for a month just being in the lab, sitting in front of the microscope, and I was sorting them based on morphological differences. After a while, I got sort of some sort of hang of things; you know, that one looks different to that one, so I put that in a different pile,” says Tina, “You get dizzy looking through the microscope all day. And a sore back!”

Some of the ant species collected couldn’t be identified and had likely never been described before. These were sent for genetic analysis in Canada. “It’s very common to find a species that nobody has described, probably collected. They have such a backlog of describing invertebrate species it just sits there as a morphospecies until someone feels the need to do it. That’s another huge area of research that needs to be looked at; invertebrates,” says Tina.

The hours spent behind the microscope paid off and gave Tina really valuable data. The ant communities showed a similar pattern to the vegetation – ant species composition in the restoration sites are becoming more similar to how they are in the in-tact reference vegetation, but complete convergence hasn’t yet been achieved.

Just as the restoration she studied doesn’t finish in an instant, and rather represents an ongoing journey, Tina’s research and passion for ecology isn’t stopping with the conclusion of her PhD. “It does feel like the journey is still going and I kind of want it to because I find it so fascinating. I’ve got a gazillion more ideas as to what I want to be doing,” says Tina, “It feels like it’s only the start really and it feels like there’s so much work that still needs to be done, those big questions like how does the system work but also how can we restore it better I would like to be busy with for the next 20 odd years or so.”

In February 2022 Tina commenced a postdoctoral position at Murdoch University that will be applying her PhD data to natural capital research investigating the economic value of the improvements provided by ecological restoration.

“I don’t want research to be, you know, just research,” says Tina, “I want it to be applicable. So I’m excited!”

You can read three papers from Tina’s PhD that have been published here: