Reducing the impact of feral pigs 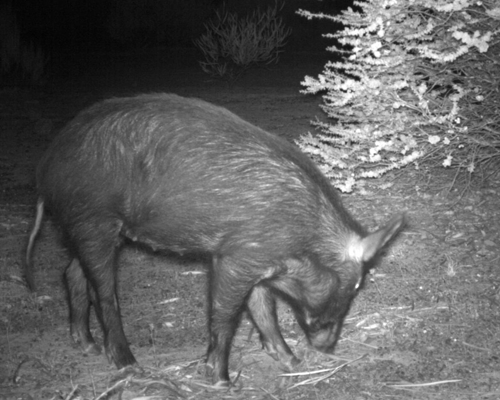 They also prey on native animals and plants, and dig up large expanses of soil and vegetation in search of food and foul fresh water. Feral pigs will eat many things including small mammals, birds, reptiles, frogs, crayfish, eggs, earthworms and other invertebrates, and all parts of plants including the fruit, seeds, roots, tubers, bulbs and foliage. Feral pigs arrived in Australia in 1788 with the First Fleet.

Feral pigs also are considered a major threat to stock as a potential carrier of exotic diseases, with the biggest concern being their role as a reservoir for African Swine Fever and Foot-And-Mouth Disease should it ever become established in Australia or New Zealand. They can also spread plant pathogens such as Phytophthora cinnamomi, which causes plant dieback.

These issues are relevant to Carbon Neutral’s Yarra Yarra Biodiversity Corridor reforestation project, which is partly contained in the Shires of Mingenew and Morawa where feral pigs have been known to be problem and are subject to management planning.

Control methods for feral pigs include poisoning, trapping, exclusion fencing, ground shooting and shooting from helicopters. Aerial shooting of feral pigs from a helicopter is used in extensive or otherwise inaccessible areas where the density of pigs is high. When used in a strategic manner as part of a coordinated program designed to achieve sustained effective control, aerial culling is an effective and relatively cost-efficient method of quickly reducing feral pig populations.

Carbon Neutral recently supported the first of CBWA, MBG, and Northern Biosecurity Group’s (NBG) joint aerial culling activities for 2022 from the 15th to 17th of March. A total of 612 feral pigs were culled, including an estimated 55 at Terra Grata.

This comprehensive and collaborative effort accompanies follow-up activities like baiting, trapping and monitoring and is supported by guidance from engaged landholders. These are planned to take place from April to June, and will help eliminate the remaining pigs that are now scattered into small groups. A second aerial cull is planned to take place later in July.

Carbon Neutral would like to extend its gratitude to CBWA, MBG, NBG, LPMT Paul Pitaro, Coral Coast Helicopters, and Paul Forward for their great work in directing the project and its success.