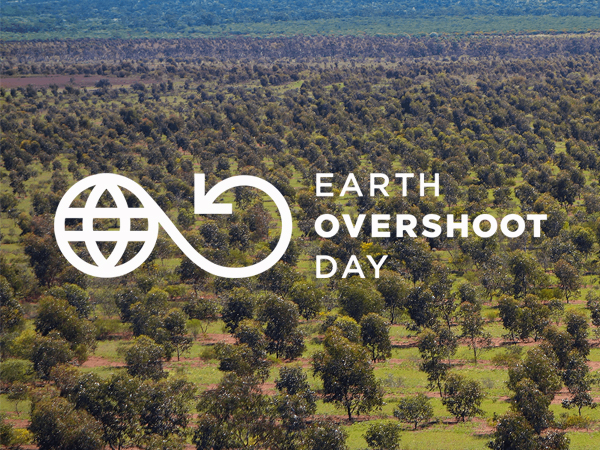 Earth Overshoot Day denotes the day in the year when the demand for ecological resources and services goes beyond what Earth can regenerate in that year.

Earth Overshoot Day was initially the brainchild of Andrew Simms in his role as part of British think tank the New Economics Foundation. In 2006 the NEF partnered with the Global Footprint Network to launch the first global Earth Overshoot Day.

The Global Footprint Network is a global research organization that provides key decision-makers with tools and information to help industry and the wider population operate within the planet’s ecological limits.

In determining the date of each year’s Earth Overshoot Day, the Global Footprint Network calculates the number of days that Earth’s biocapacity is sufficient for humanity’s Ecological Footprint. The remainder of days in the year then parallels with global overshoot.

Earth Overshoot Day is calculated by dividing biocapacity (the amount of ecological resources Earth is able to generate that year), by our Ecological Footprint (humanity’s demand for that year) and multiplying by the number of days in that year, (365 in 2022).

For those of you that are mathematically minded, the equation looks like this:

Alarmingly, Earth’s Overshoot Day for 2022 arrived on July 28. The basic maths then tells us that globally, humanity used 100% of the resources in 57% of the calendar year. Closer to home, Australia’s own overshoot day is the thirteenth earliest in the year, on March 23rd. Again, basic maths tells us that Australia tips into the resources ‘red’ after a mere 22% of the year has passed. In layman’s terms Australia needs to improve its management of resources by a factor of five.

Throughout most of human history, we have used nature’s resources to build cities, roads and infrastructure, to produce food and products, and in turn release carbon dioxide at a rate that was well within Earth’s manageable capacity. However, in the early 1970s, that threshold was crossed. Human consumption began outpacing what the planet could naturally regenerate.

Humanity’s demand for resources now corresponds to that of more than 1.7 Earths and the data alerts us to the fact that we are on track to require the resources of two planets before the middle of this century.

The costs of resource depletion are becoming more and more evident. Climate change is now an undeniable result of greenhouse gases being emitted and the most obvious result of the overshoot. Other biophysical effects include deforestation, species loss and soil erosion are examples of further issues that face the planet until humanity learns to become more sustainable.

What can be done to move the date?

At Carbon Neutral we promote the mantra: measure, reduce, offset. It is essential for all of our future generations that we all do what can, and especially in reducing what we consume and how we recycle and reuse. It is inevitable that after reduction happens, then more needs to be done and the products that we offer are the next feasible step in securing a habitable planet for future generations.