Circling around the issue 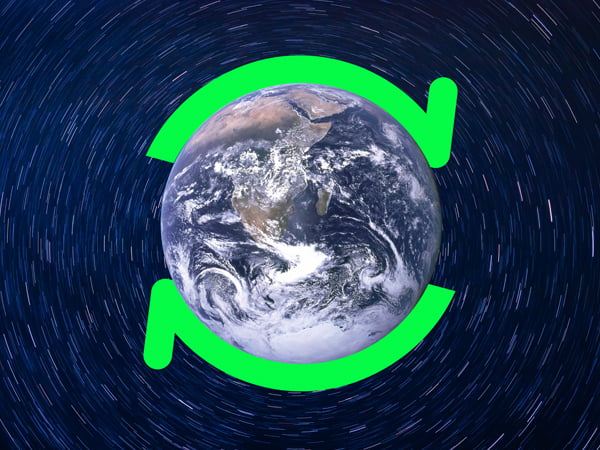 What defines a true circular economy and why is it a vital component in the fight against the global climate change and biodiversity loss?

Our work in the carbon and sustainability sectors exposes us to new and interesting terminology with every passing week. Many of the new phrases and terms seem confusing at first, so each month we are attempting to untangle the ‘carbon jargon’ in an ongoing series.

This month we’ve taken a look at the circular economy – what does it mean and why should businesses strive to be a part of it to create a more sustainable society?

Squaring the circle
A circular economy is a model of production or consumption that involves sharing, reusing, repairing, refurbishing and recycling existing materials and products to enable them to last as long as possible, (and in turn reduce their impact on global greenhouse gas emissions).
Circular economies aim to address issues such as global climate change, biodiversity loss, waste and pollution by highlighting design-based applications of the three base principles of the model.

Put simply these three principles are:

In a traditional (non-circular) economy, humans take materials from the earth, manufacture goods from them, and ultimately throw them away as waste – this process is defined as ‘linear’. In its most basic definition, the circular economy stops waste being produced in the first place.

Importantly, these principles are underpinned by a transition to the use of renewable energy and materials. A circular economy dissociates economic activity from the consumption of resources that will one day run out. A true circular economy is a resilient one that has immeasurable benefits for businesses, the environment and society as whole.

To truly function as a circular economy businesses and individuals must change the ways in which they manage their resources, how they create and make use of products, and what they do with the materials after their initial use. It can’t be understated how much a true circular economy plays a key role in tackling climate change and biodiversity loss.

The roots of the circle
The term ‘Circular Economy’ first appeared in 1988’s “The Economics of Natural Resources” by David Pearce and Kerry Turner when they used the term to describe an economic system where waste at extraction, production, and consumption stages are turned into inputs. At the turn of the millennium, China incorporated the concept into its industrial and environmental policies to make them resource, production, waste, use and life-cycle oriented.

In 2009, The Ellen MacArthur Foundation were formed with a remit to accelerate the transition to a circular economy. Their inspirational work continues to develop and promote the ideas around a circular economy, and today they work with businesses, academia, policymakers, and institutions to organise large scale global systems solutions that fit into the circular economy model.

In 2014, the EU introduced its vision of the circular economy, and by 2020 had launched a “New Circular Economy Action Plan”. The plans aim is described as showing the way to a climate-neutral, competitive economy of empowered consumers.

Rounding up criticism
As with any new concept that relies on science and innovation, the concept of the circular economy has met inevitable criticism. Critics have suggested that proponents of the concept overstate the benefits and put forwards that the circular economy has too many definitions to be properly defined, making it an umbrella notion that, while very exciting, is also too hard to understand and adopt properly.
Another major criticism of the concept is that it ignores the thermodynamic principle that things can’t either be created nor destroyed. Therefore, a future where waste no longer exists, where raw material cycles are closed, and products are recovered and recycled indefinitely is impossible. The arch critics conclusion is that there is a lack of clearness as to whether the circular economy is as viable than the linear economy, and what its social benefits might be.

Closing the circle
Here at Carbon Neutral we are no strangers to cynicism or criticism around global efforts to enable a more sustainable society. While we acknowledge that it may not be possible to live in a world without any waste whatsoever, or a world that uses only resources that are entirely renewable, surely, it’s a worthwhile ambition to attempt to adopt as much of the concept of a circular economy as each of us can?