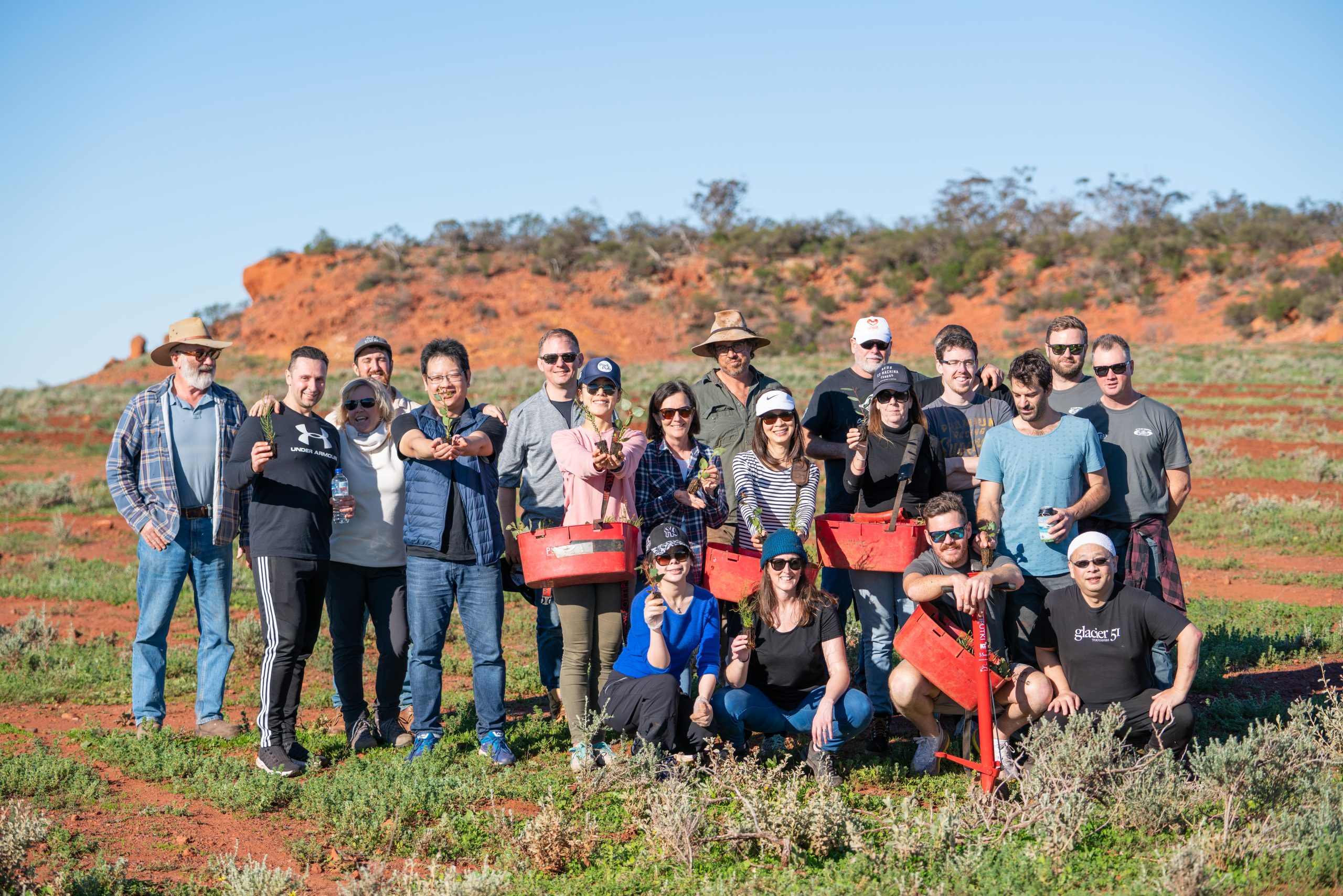 With the world’s oceans as its place of work, Austral Fisheries has always understood that the planet’s marine systems are changing. Recognising that the climate emergency was already affecting a food source humans have relied upon for thousands of years, Austral knew it had a responsibility to take action.

In 2016 Austral made a bold decision – to become carbon neutral certified as an organisation and to extend this status to its products. This vision and leadership paid off, and 402 days later Austral became the first carbon neutral seafood business in the world. But Austral’s journey didn’t stop there. In the last six years it has continued to build on its emission reduction strategy and has contributed towards the planting of over a million trees and shrubs in Carbon Neutral’s Yarra Yarra Biodiversity Corridor.

“It’s the right thing to do. Climate change is real and it’s here and it’s the duty of us all to do our bit to give our descendants a fighting chance of inhabiting a liveable planet by the end of the century. I also happen to believe that it is good for business!”

Austral Fisheries’ sustainability journey began in 1997 when it became the first fishing company in the world to sign up to the Marine Stewardship Council (MSC) – a sustainable and traceable international certification for wild fishing. Austral Fisheries believed it was critical to ensure that sustainable management, science and conservation were at the base of its business. By 2012, all four of its Commonwealth-managed fisheries were certified as sustainable and well-managed by the Marine Stewardship Council. Each of these steps, among many others, has helped solidify its approach and commitment to sustainable fishing practices.

Austral Fisheries’ decision to become carbon neutral emerged from a recognition that the changing climate was already impacting the oceans in significant ways. With temperatures increasing, corals dying, icebergs melting, and fish stocks moving in some regions – the time to act was now. To really make an impact, Austral aimed to become carbon neutral certified for all of its operations, both as an organisation and for its products, all the way from ocean to plate.

As a leader in the marine industry, Austral also understood it had the opportunity to pave the way – to make it a more sustainable sector and lessen its environmental impact. Along the way, Austral has encouraged others, including its suppliers, to do the same. Austral knew it needed to go about this chapter of its sustainability journey in the right way to really make an impact, and so pursued the Australian Government’s Climate Active Carbon Neutral certification for organisations credibly reaching carbon neutrality through emission reductions and achieving net zero emissions.

“We chose the Climate Active Carbon Neutral standard in 2016 because it was credible and had Australian Government backing. Now, as support grows, we are able to see our message amplified as members from across the spectrum of Australian business show the leadership that is needed to create our low carbon future.”

The vision for Austral Fisheries’ journey to carbon neutrality was to increase the efficiency of all its operations as much as possible, reduce its carbon emissions wherever it can, and to fully offset its remaining emissions.

Starting in 2016, Austral accounted for all its greenhouse gas emissions, including the fuel it burns on its vessels at sea, the emissions associated with production and transport of supplies to vessels and all supporting activities such as shore-based operations and management, administration, policy development, sales and marketing.

These Scope 1, 2, and 3 emissions that made up its entire operational carbon footprint were then independently audited and certified. As part of this process, Austral conducted Life Cycle Assessments of all its wild caught seafood products, including its portfolio of brands and the seafood it purchased through its trading division. Austral chose to extend its Scope 3 emission boundary to include the seafood purchased by the end consumer, encompassing downstream transportation, cold storage and cooking by restaurants.

Once Austral understood its organisational carbon footprint, the focus shifted to how it could reduce its emissions wherever possible. Because Austral’s operations fluctuate due to catch variability each year, or due to external pressures outside its control, the organisation used the rate of carbon emissions per tonne of product landed as the functional unit for reducing its emissions. Austral knew that because of the size and complexity of its business, as well as its reliance on long-term assets like fishing vessels, its carbon offsetting and reduction journey wouldn’t be complete overnight and would instead be a commitment for years to come.

One of the key emissions reduction measures Austral Fisheries have implemented is its new ~$50 million Cape Arkona vessel, which employs world-first hybrid-electric technology that dramatically reduces fuel usage and takes an older, less efficient vessel off the water. Austral have also installed other fuel efficiency measures on its other vessels, in addition to modifying sea routes in their processing pipeline. Further reductions were made using carbon neutral energy providers, paper sources and installing LED lights and solar panels wherever possible.

Despite these substantial measures, it is inevitable that some emissions remain. To become carbon neutral certified, Austral has offset these emissions through credible and positive-impact projects. Since 2016, Austral Fisheries has worked together with Carbon Neutral to restore a degraded woodland ecosystem through the purchase of nearly 200,000 tonnes of biodiverse reforestation carbon credits in the Yarra Yarra Biodiversity Corridor. This project is Gold Standard-certified, regenerating biodiversity alongside a host of other co-benefits in the northern wheatbelt of southwest Australia.

Austral Fisheries has planted more than 220,000 trees in the Corridor every year since 2016. The team has visited the project site several times, and even helped plant some of the trees themselves. Austral’s commitment to the climate has seen it achieve and maintain Climate Active certification since 2016.

“I just love spending time in this country that sits at the very eastern margins of agriculture and right on the edge of the desert. We are blessed to have the opportunity to stay in a homestead that was a house for sheep and wheat farmers and is now in the middle of a forest of new life. The property is an easy 4 and half hour drive from Perth and is located not far from the small township of Perenjori.”

Austral continues to collaborate with a range of stakeholders in the fishing industry, including global fishing industry coalitions, inter-governmental agencies and environmental organisations like World Wildlife Fund and MSC on a range of topics such as best practice fisheries management, science to support fisheries management and contemporary environmental and compliance issues. Austral has also developed alliances with Sea Shepherd to counteract illegal fishing and participate in coastal rubbish clean-ups.

Together with its customers, suppliers, and other industry leaders, Austral Fisheries are making a difference to the way seafood is provided for the future.

With one eye always on the horizon, Austral Fisheries continues to take strides on its climate commitment as it moves forward. The organisation recently signed up to climate insight firm Praesideo’s zero-carbon 30 commitments and was the first company to receive an AAA Carbon Rating. Austral is also committed to transitioning to 100% renewable energy across its Australian offices by 2025.

Austral Fisheries continuously strives to encourage other businesses to join it in taking climate action. With the crew, staff, and organisation educated and involved in its journey, Austral is spreading the word and influencing its suppliers to provide lower emissions goods and services.

Austral has taken additional measures to reduce its environmental impact, such as investing in a range of new fishing gear that reduces harm to non-target species, to reduce its impact on a range of threatened marine species and seabirds. In 2020 Austral launched the Seafood For Good accelerator program, a 12 week initiative to develop and create innovative solutions for sustainable seafood in Australia.

“I never fail to wonder at the ability of nature to bounce back when given half a chance and that, by our actions, we are able to help this happen at scale is a source of great satisfaction.”